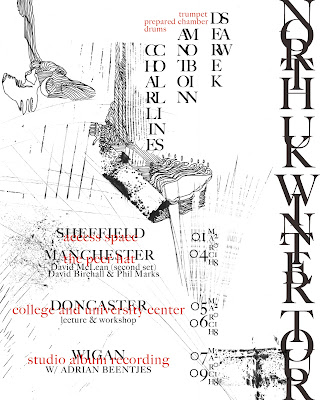 As Steve Noble told me, "two gigs are already a tour!" So here we go ! New trio with drummer Charlie Collins and trumpeter Derek Saw !! Needless to say that will be a honor and extreme pleasure to replay with these two legends! uh no! in fact it does not cost anything to say it again! First stop will be at our beloved venue Access Space in Sheffield on March 1st (thanks to Jake Harries) and then, second stop at The Peer Hat in Manchester on March 4th. I would like to sincerely thank Tubers Music Manchester (David Birchall) and Tombed Visions Records (David McLean) for the support and to join their forces to organize this concert. Saxophonist David McLean will join us in an exclusive quartet for a second set and David Birchall will play duo with the drummer Phil Marks; it sounds like a crazy night of free improvised music !

Then I continue this journey in the north alone: I will intervene on March 5th and 6th in Michael Dunn' Creative Music Technology program for a lecture and presentation of my instrument, the "Prepared Chamber", and around DIY practices and instrument-building as well , plus a workshop with students on Recycled magnetic pickups at Music and Performing Arts at University Centre Doncaster !

Then, to conclude; direction Wigan for a few days to record a new duo album with my old friend and genius Adrian Beentjes, 6 years after our "Micro Sounds Biopsy" released on Zeromoon! A real ten days blast forthcoming !

For the past few years Anton Mobin and Charlie Collins musical paths have crossed and re-crossed, culminating eventually in their duo performance at the finale of Anton’s “Hugh Davies Project” at Sheffield’s Access Space. Another year passed, and a studio album recorded, their live encounter with brass specialist Derek Saw sealed the deal on the formation of this intense but thought provoking electro-acoustic trio. 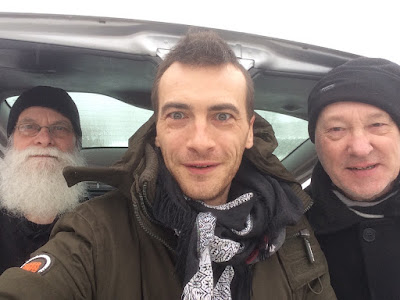 ANTON MOBIN is an experimental musician, improviser and radio producer. He has developed DIY principles for experimental self-built instruments, which he calls "Prepared Cambers", in which there are arranged a multitude of every-day objects amplified by piezo-electric contact microphones.
He has run the label H.A.K. Lo-Fi Record since 2001, and over the last 15 years has collaborated and performed with many musicians, including Jello Biafra, Sonny Simmons, Bryan Lewis Saunders, London Improvisers Orchestra, Alexei Borisov, Benedict Taylor, Naoto Yamagishi, Daniel Thompson, Ayato, Will Connor, and Simon Henocq.

CHARLIE COLLINS is a creative percussionist, free polyrhythmic drummer, and sound artist, based in the UK. His work continues to explore the boundaries between pure sound and rhythm, frequently incorporating metal percussion and free improvisation. Early recordings for cult labels Industrial, Fetish, and Doublevision were soon followed by collaborations with many of the pioneers of free improvisation, while his interest in East Asian percussion and rhythm technique is displayed in current work with komungo player Eun-Jung Kim, pianist Yoko Miura, visual artist Bongsu Park, composer Ryoko Akama, and Butoh dancer Tsukasa Kamidate. He is one of a handful of musicians to have played both Derek Bailey’s Company Week and Top Of The Pops.

DEREK SAW has worked in free improvisation and experimental jazz since his move to Sheffield, UK, in the mid 1970s, where he later played in legendary electric free/jazz group Bass Tone Trap. In the mid eighties, together with Martin Archer, he formed the respected Hornweb saxophone quartet, while also leading Rhythm Division, which included drummer Paul Hession. Much in demand as a collaborator, his more recent activity includes touring regularly with Sonny Simmons Quartet, and performing and recording with both the Linda Sharrock Group and innovative theremin player Beatrix Ward-Fernandez Trio. 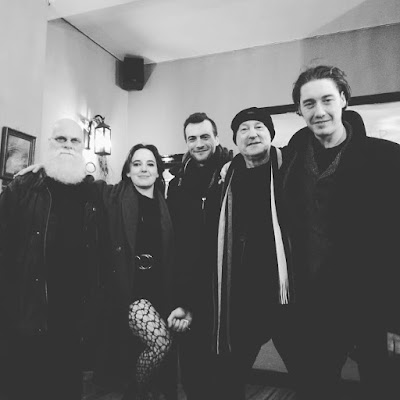