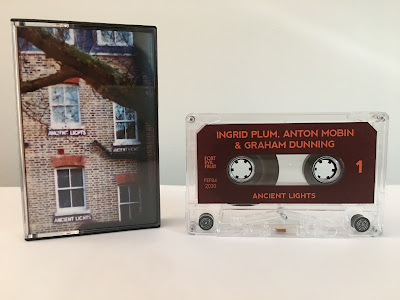 About Ingrid Plum
Originally from Denmark, Ingrid Plum uses her voice with extended technique, improvisation, field recordings and electronics, to create layered soundscapes, spoken word and songs. Described by The Guardian as “gorgeously atmospheric vocal techniques woven around field recordings & electronics” she has performed and exhibited installation art internationally since 2002, creating work that combines sound art, contemporary classical and folk music. Incorporating her research into folk traditions with field recordings and studying directly with Meredith Monk her recent performances have been described as “succinct and nourishing... a luxuriant space between almost excessive precision and looser improvisation" by The Wire.

About Graham Dunning
Graham Dunning [b. 1981] is self-taught as an artist and musician having studied neither discipline academically. His live work explores sound as texture, timbre and something tactile, drawing on bedroom production, tinkering and recycling found objects. He also creates visual work, video and installations drawing on these themes.
Much of the work evolves through experimentation with different processes: considering the methods by which sounds become music; process as a continuum encompassing both improvisational and procedural methods; and testing analogous processes across different media.


Graham has performed solo and in ensembles across the UK, Europe and Canada, and exhibited in the UK, Europe, New Zealand and USA. He teaches Experimental Sound Art at the Mary Ward Centre in London and also gives various independent workshops. He has released through Entr’acte, Seagrave, Tombed Visions and more.

Notes from the label :


The title, which can be seen under the windows of some London buildings, refers to a 19th century law guaranteeing unobstructed natural light. Recorded in that city, the music feels situated there, evoking understated mystery, benevolent grittiness, and the fragile quietness that can occasionally occur in a densely populated area.

Review on "Noise Not Music" by Jack Davidson

I’ve often discussed the marked difference between directly recorded and reverb- filled, space-utilizing tabletop improvisation, and how artists’ work can fall into either category (or both). Like Dylan Burchett’s bread, the piece which most recently engendered this discussion, Ancient Lights seems to possess elements both internal and external, with a spectacular intensity that could only from these three mad sound-scientists at their eclectically equipped laboratory surfaces. Each participant is a formidable force in their own right: Ingrid Plum, accomplished improviser and performer, lends choice contributions from objects, Walkman, and utterance; Anton Mobin, master of his singular, lushly intimate style of théâtre d’objets, amplifies and broadcasts miniature percussive events from his prepared chamber; and Graham Dunning, dedicated sound artist and educator, bewilders (as usual) with his virtuosic extended turntable techniques. This well- controlled mess of machinery takes a while to emerge from the recording which begins “Frame Makers,” which one might think captures the sound of audience members and the surrounding locale during the music’s recording—but all ofAncient Lights was documented in the controlled studio environment of Sound Savers in Hackney. This is just one of many instances in which field recordings and other disparate intrusions are used to play around with physical space in its communicative form, when a somber, wordless croon or distant clunk greases the already precarious surfaces of churning cogs and rotating plates. 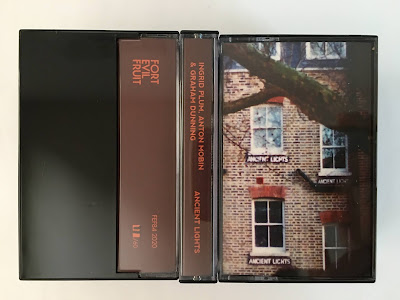 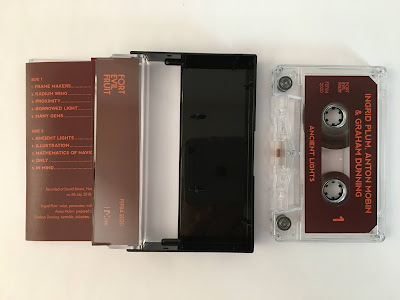 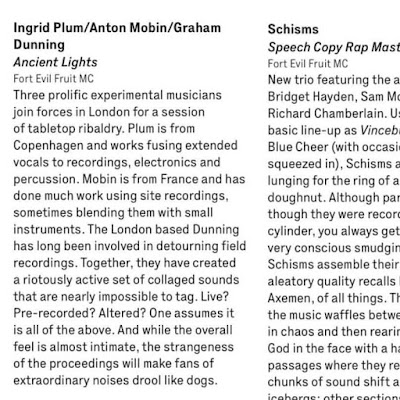