Mopomoso’s 21st anniversary year continues with an international line-up presenting some of the best in free improvisation.

Italian Albinese was noted as the most talented musician at the Umbria Jazz festival in 2009 and awarded a full scholarship to Berklee college of music. There followed collaborations with a.o John Tchicai, Steve Potts, Kent Carter, Gianni Lenoci and William Parker (with whom he has recently recorded a duo CD). Spaniard Tejero is well known to listeners in his adopted city of London where his intelligent approach makes him a highly valued contributor to the scene. His international connections have seen him playing in the USA, South America and Europe and he has recently returned from a Japanese tour. A real pleasure.

Excellent Anglo-American duo whose CD ‘The many Shades of Bread and Shed’ is released to coincide with this appearance. Hallett’s atmospheric violin, electronics and ‘all things bowed’ never cease to enthrall and makes her an ideal partner for Californian vocalist Homler’s ‘landscapes of the imagination’.
“HOMLER is…making words musical and music like words.” — New York Times
“HOMLER seems to sing in the forgotten dialect from some past life or some past world… disconcertedly bewitching” — Cadence

New York based Ostrowski is a pioneer of electronic arts with an ‘interest in density of microevents, rapid change, and using technology to stretch the bounds of perception and experience’. As well as live performance recent installation projects have included the site specific Spectral City, shown in Germany and Japan, and Scarlet(t), a work based on the film “Girl with a Pearl Earring.” Joined by the fiery London based trio of Grant / Russell / Solomon, three musicians whose playing should need no introduction, we can expect a set of rapidly shifting and surprising exchanges underpinned by a shared sense of musical purpose. Not to be missed! 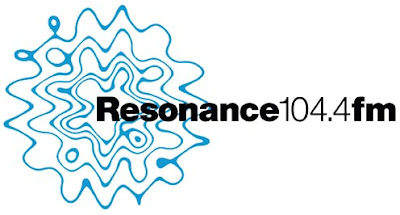 The show will be hosted by Art Terry and Will Connor.

I'll play a short collision on air, plus duo and trio experiment with Adio Lawal-West, Matt Chilton and Anthony Donovan. or paste this link in your browser :
http://icecast.commedia.org.uk:8000/resonance_hi.mp3.m3u 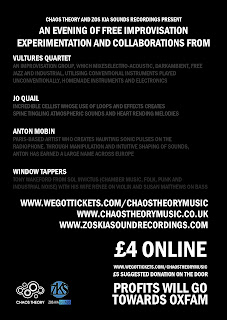 We are proud to present a special charity event in association with Zos Kia Sounds Recordings. All profits will go to Oxfam. We will also be seeing solo sets, collaborations and improvisations from:

JO QUAIL
Incredible cellist whose use of loops and effects creates spine tingling atmospheric sounds and heart rending melodies. Star of the extremely successful event From The Sea To The Desert last October.

ANTON MOBIN
Paris-based artist who has developed his use of the radiophone over decades. Through his manipulation and intuitive shaping of sounds, Anton creates haunting sonic pulses that have earned him a large name across France, Belgium, Germany, Portugal and the USA. 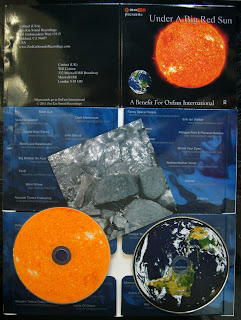