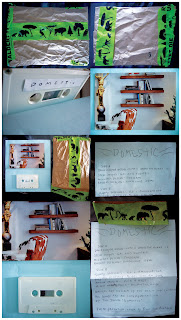 
All songs are an interpretation of the theme "Domestic". The finished project was not distributed on CDRs as usual, but on audio cassettes which were individually designed by Rinus. Project description, from the original invitation:

"domestic But see this theme also as an adjective, so as a point of departure
because it can refer to things/objects/situations/memories/ related to your life in and around your house but also used as in inland, like domestic flight both possibilities are welcome"

"Vies-à-Vies" is a preparatory study to the long-term project with the same name...
For 5 years, the project " Vies-à-Vies " consists of a collection of daily atmospheres and domestic sounds recorded in the windows of my apartment: the microphone outside, the body inside.

Two windows: the first one is due north, the other one due south in the last floor of a building without towards. Short and trivial recording of a sound, a movement, a vibration which calls during the day.

Sound recordings are classified according to this north / south criterion and leave apparaitre characteristics appropriate for each of the points of recording:
Northward, the window opens on a yard framed by buildings from which the first one is relatively far, the recordings all reveal a distant humming and a light echo. In the South, the street, the cars, people, of the noise... And the breakdown of the opposite building which leaves on the recording a heavy and variable breath...

The title " Vies-à-Vies " (Lives to lives) makes reference to the french words vis-à-vis which mean "towards".