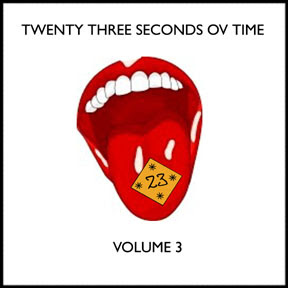 23 Seconds ov Time Volume 3
was compiled from May 23, 2011 thru August 1, 2011.
All tracks were collected, assembed, & mastered
by Frequency 139 for AIN23.
some tracks were milliseconds over the alloted time of 23 seconds and they were edited to fit the format.
(The segments that were taken from these tracks were combined into a track called "xes", which appears on the limited CD release of this edition)

The extended collected track "23SOT V3" features 59 contributions that were sent in during the peroid that tracks were accepted.
Every track that was submitted was accepted.
Each submission appears in the order in which it was received.
We received contributions from 10 Countries and 17 States in the USA for this volume ov thee project.

>> TRACKLIST <<
This volume had a smaller response than previous volumes of this project due to the change in the theme this time around...for this edition we ONLY accepted Spoken Word or verbal submissions. And so the ammount of individuals comfortable with their voices and those that are not seems to be a much higher ratio of difference than we expected.. but still the experiment was worthy and satisfying for this volume.


A limited edition, hand numbered CD package with bonus mixes, & special insert is being planned for release in October 2011.
check back at the NEWS page for more information