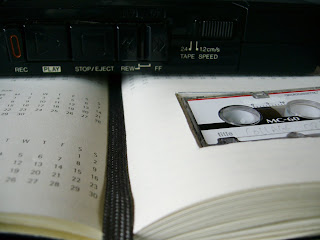 The Sound Diaries project will be organized online using blogging software, allowing regular and frequent updates to the site to be easily managed. The use of blogging software also means that visitors to the site will be able to leave comments, to remark on what has been posted and to promote work in real-time. We are interested in involving as many people as possible in this project and in the website having a dual function as both a collection of ideas, and an online showcase for artists working in this territory.

MICRO SOUND DIARY 08 is twenty one successive micro sequences recorded with a dictaphone on micro cassette, during one week holidays in August 2010, in Le Croisic (44 - France).

It consists of three short sequences recorded a day, which gives a piece chained mostly with the elements of the marine world (sea, sand, birds, buckles of mooring…)

Each sequence is chosen according the previous one to create the chain.

The choice to use a dictaphone is to be very reactive with the sound you want to capture.

Of course I could use a better system to have a better sound but the time of installation often harms in spontaneity of the recording.