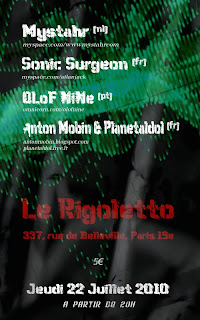 JEUDI 22 JUILLET 2010
Au RIGOLETTO
337, rue de Belleville
75019 Paris
De 20:00 à 00:30
5 euros
MYSTAHR (NL)
"Mystahr, a mad Dutch scientist that loves the knobs. Too soft for true noise, too noisey for experimentalism; its just powerfull.
Recently the album 'Nothing Near Distance' was released on HAK lofi and with it the artist arose from a quiet period.
No laptops will be involved, only some pure stompboxes and rather awkward and strange machinery that will pulse and drone deep into the night.
Weaving a tapestry of drones and pulses, interfered with pre-recorded tapes this promises to clean out your nostrils and earlobes to infect them with an infectuous sound that will long last in your system.
Mystahr is the same guy responsible for both the excellent weekly NTNS radioshows as well as the labelhead of Just not Normal.
If you know either, then you will know what to expect from this sound meister!"
http://www.mystahr.com/
http://justnotnormal.wordpress.com/
http://ntnsradio.wordpress.com/

"Most of sound radiated by metamorphic structures is known as meta-structure sound. The discrete model is a non-abstract domain which is a basic element of structures. Each structure is excited at one point in the logical series. Damping is taken into consideration by using a proportionally damped model or a dashpot model. The dynamic response of the element is calculated by using the infinite method to obtain vibrational and sound energies. The vibrational and sound energy flow patterns, which are expressed by vector quantities of structural and sound intensities, are compared. The effects of the vibrational dissipation energy on the flow patterns of the sound energy are also denied and two types of flow patterns (S- and M-types) are processed."