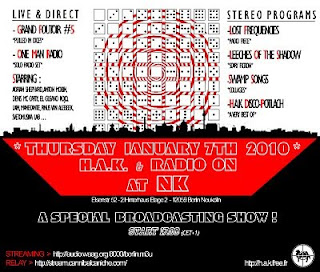 Grand Foutoir is a game of improvisation pulled in dices.

It takes part with the regular events organize by the H.A.K. collective in France.

Already done 4 Grands Foutoirs in Orléans (France) : two editions at the gallery Images du Pôle, gallery Wall, and one under the big top of the TSRT circus.

For The fifth edition, le Grand Foutoir settles down in NK, Elsenstr. 52 - 2.Hinterhaus Etage 2 - 12059 Berlin Neukölln; with the delicious invitation of Julian Percy.

This referee pull with two dices the set list and the sound combinations of the concert.

-Dice number 1 : is to determinate how musicians will play

(The name of the artists is pull out a magic hat, according to the result of dice N°1)

-Dice number 2 : is to determinate how many minute they will play

The experiment will go on !