"Four Corners of the Night" on Staaltape 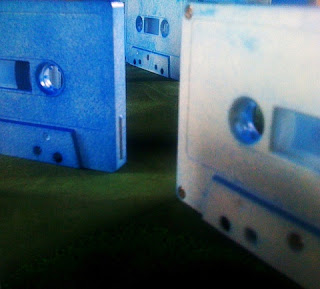 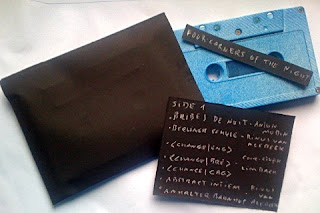 All compositions come from original recordings made on 20/21 June during the shortest night of the year 2011. Recordings were made by Konrad Korabiewski in Eydistjorgur in Iceland, Pierce Warnecke in a barn in Montagny les Lanches, France, Anton Mobin on a walk in Belleville, Paris, Christoph Limbach on a bicycle ride in Berlin and Rinus van Alebeek on the Museuminsel in Berlin.


Four corners of the night is copied on a white chrome cassette. The cassette has been spray painted with mat and normal blue colour. The package is hand made from heavy black paper. The inlay information is hand written with a white and with a black pencil.

Four corners of the night can be listened to as a journey from the beginning to the end of the night, with all its density of a warm summer evening, the small mysterious sounds that appear when the whole town seems to be asleep and the start of the new day with all its activity. It is also a story in various episodes. Sounds that are prominent on one composition become less apparent once an other protagonist takes over and guides the listener in a different direction.

Of course there are many ways of listening. On a pure musical level it is a proof of virtuosity, and offers the listener also a possibility to investigate how different compositions can be made from the same source material. On a narrative level there are enough leads that can fuel the imagination and open up visions of a night on earth where-ever the proud possessor of this tape may find him- or herself.

Note to the “chance”- compositions of Christoph Limbach. Each track refers to a theory of chance by Friedrich Engels, Andre Bréton and John Cage, respectively. 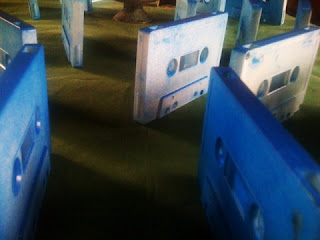 Four critical notions on “Four Corners of the Night”

Each of the composers on this tape, gave a copy to a friend or relative. The friend or relative was asked to send the copy to a friend or someone they knew who would appreciate the gift. Of course we supplied them with an envelope and stamps. The request to the receiver of the tape was to listen and send us their thoughts. An important note is that none of the receivers were used to listen to this kind of sounds.

Ben Marat works in a vegetarian restaurant in Los Angeles, he is into pop art and Japanese comics, doesn’t have any specific musical preferences, maybe early Kraut rock:


“The title says it all: this is a dark, bleak tape that succeeds in showing glints of humanity among the  pieces. Singular in tone (…), not by choice or action, but by circumstance. A very compelling, if slightly  short listen.”

Paul Buonaventura studies medicine in Leicester. He has a large collection of succulents, loves latin-american music:


“In Four Corners of Night, the composers create a convincing world of suspense and fear, hope and heartbreak. The pieces are wonderfully written, multifaceted, displaying depth and complexity. As in real life, the tracks are not all likeable. Their sounds are, at times, reprehensible. As you listen, you will find yourself questioning the redeeming quality of good music. You’ll be on the edge of your seat during the final seconds. And in the end, you will say, “But did they do it?” This tape will haunt you. I’ve already listened to it twenty times, and somehow I’m still not finished. My highest recommendations. LISTEN to it!”

Carmen Polanski lives in Buenos Aires. She works as a pharmacist. Her musical preferences are dictated by Ubuweb, the best resource for avant-garde in the web:


“Very good tape. It is well composed, suspenseful, thought-provoking, and rich in sound. It moves along well and throws in some unexpected changes. The four composers are  excellent sound artists, able to balance the composing requirements of a good piece, as well as the artful prose of an interesting tape. I recommend this tape  highly to not only field recording lovers but also to those who just want a good listen.”

Sally Langdon, works in a library in Boston. She loves the works by Schubert, but also by Stockhausen. She likes to go to the ocean and listen to Debussy’s La Mer on her headphone:


“When I was still in college, a friend bought me an experimental tape – and I was hooked. I have always been a hard-core devotee of classical music and any record shop owner will tell you, it’s fairly unusual for someone who listens to classical to also listen to field recordings just as avidly(…) The best ones, though,(…) delve into the dark night of the psyche at the same time as they dig into the narrative that forms the tape’s foundation.”
Publié par Anton Mobin