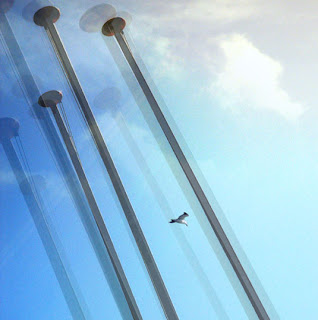 PARIS-PLAGE (14'24'')
Released on Konkretourist netlabel
With his new piece the Paris-based sound artist Anton Mobin does not compile a vague weather forecast, but alters the climate significantly. The composition appears to be traditional and the modern Click & Cut movement reconcile with the near-ground sounds found in Music Concrete.
In this near-ground area the artist creates much more than factual statements of meteorology with statistics, investigations and average values. It becomes a micro-climate full of sounds, noises and sometimes scraps of conversations assembled to a clearly defined landscape. To a greater degree Mobin paints an imaginary terrain with a variety of textures, vegetation, existing development and temperature differences. All that has influence on the audible micro climate. Different colorations and various currents strain the imagination of the listener, but there is always free space for interpretation.
And after all the quarter of an hour piece works like climatic changes do. Immediately.
The composition based on source material recorded in 2008 on the peninsula of Croisic (Bretagne) and on the Ile du Frioul (South of France) and became part of the soundPOOL installation at SoundLAB VI.
Publié par Anton Mobin